Welcome to Our Parish!

Our parish was chartered by the State of Illinois in 1970 and will celebrate its 50th anniversary in 2020. There were about 6 Ukrainian families in the suburbs of Chicago that wanted to form a parish even though they did not yet have a church building or priest. Their own church would not become a reality until 1976, when the first service was held on the Sunday of Annunciation. A make shift church in what was once a horse stable served the parish until the congregation of some 100 families could raise the two million dollars it would take to construct their dream.   In 1987 the current church was completed and blessed in honor of the Millenium of Ukrainian Orthodoxy (988-1988) by Metropolitan Mstyslav Skrypnyk later the first Patriarch of Ukraine.  Today, St. Andrew’s has about 150 families as members.  The church is largely made up of Ukrainian World War II immigrants, second generation Ukrainians and now a new immigration of culturally aware and patriotic Ukrainians.

St. Andrew Ukrainian Orthodox Church  provides a great number of programs and ministries through it's many organizations.

The backbone of the parish is The Saint Sophia Sisterhood, which has devoted countless hours in raising funds for the parish.  Through weekly sales of Varenyky (pierogis) they have become a staple in the community and it is not uncommon to have a line out the door on any given Saturday morning.

St. Andrew has also become known for its beautiful Ukrainian Choir.  Ukrainian liturgical music as well as traditional Ukrainian music is performed in its purest form with unmatched interpretation.  The parish choir was built upon the direction of Dr. Vasil Truchly and has performed for public audiences throughout the USA and has recently released several recordings.

The parish has a very active youth ministry, including the Saturday Ukrainian School, with various religious and cultural educational programs that cater to the community's ever growing youth population.  Religious education is provided by our associate pastor Rev. Mykhailo Leshchyshyn every Saturday morning at 9 am.  In addition the youth of the parish have a Ukrainian Folk Dance School with Ensembles "Horlytsia", “Vodohray” and "Metelyky"  which meet twice a week for rehearsals and have performed throughout Chicagoland.  There are classes for preparing the youth for first confession and communion on Sunday mornings.  The youth are also involved in various fundraisers such as lunches, car-washes and bake sales.

The parish also sponsors a retirement community, St. Andrew Co-op is made up of 23 studio, 1-bedroom and 2-bedroom units on land adjacent to the church.  Many of the owners devote their time and physical efforts to the church throughout the week.

A bi-weekly newsletter, the Vicariate of the Orthodox Church of Ukraine Bulletin, keeps the parish informed of all the various activities, service schedules and other events that occur within the Ukrainian Orthodox community.

A potion of our 15 acre site is dedicated to our loved ones who have passed away, St. Andrew Ukrainian Orthodox Cemetery provides a beautiful setting for all Christians to have a proper burial.  In addition to the cemetery we have the landmark monument to the Ukrainian Genocide Famine of 1932-33 and the monument to the Heaven's Brigade and All Heroes who gave their lives for a free and independent Ukraine".

In addition, St. Andrew parish sponsors an annual Ukrainian Festival  and many other Ukrainian cultural concerts. The beautiful Church complex with it's elegant auditorium was constructed just 20 miles west of downtown Chicago in 1987.   If you have any questions, want to learn more about our parish or to schedule a tour, please email us at: info@standrewuoc.com or call the Pastor Very Rev. Victor Poliarny at (630) 217-5524. 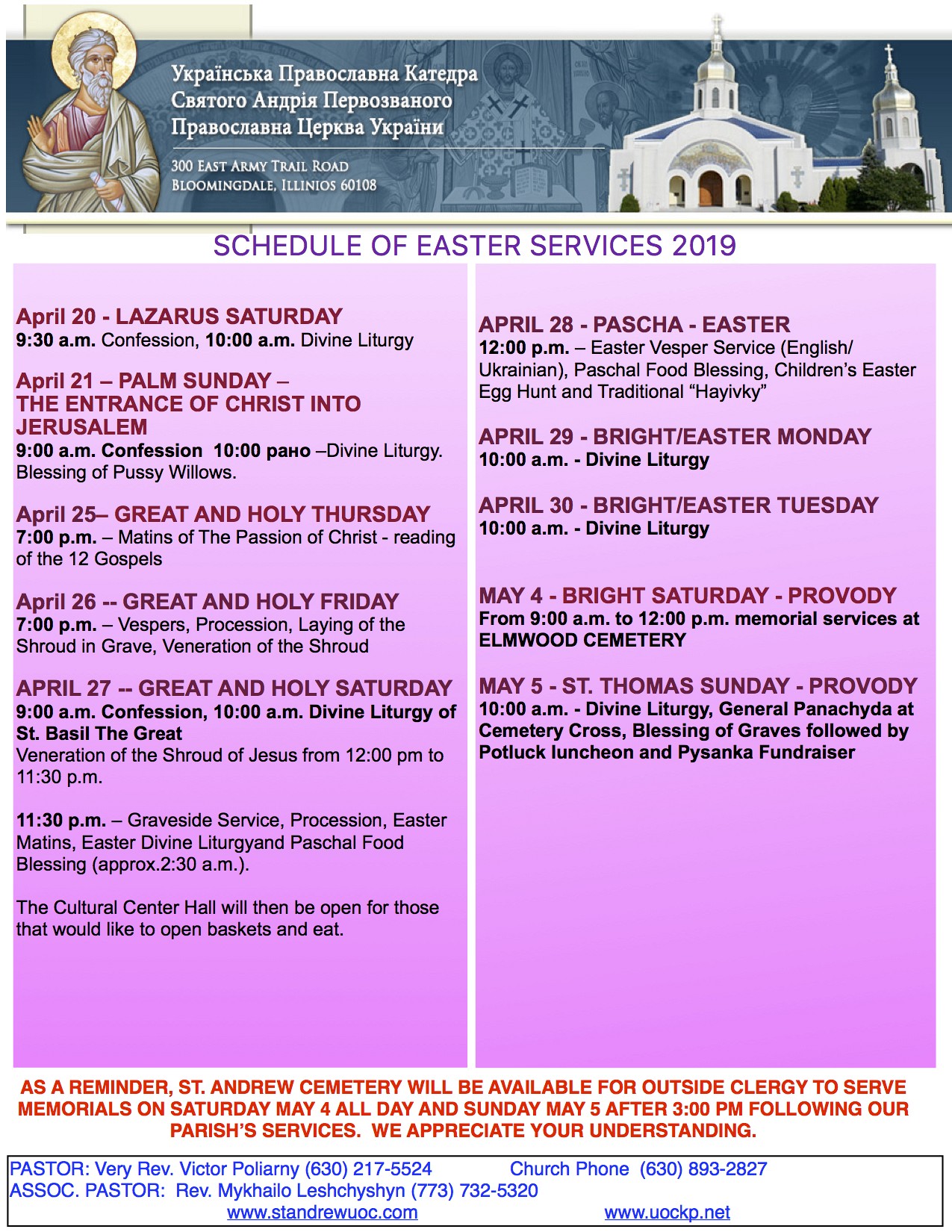 Donations To Our Church

Would you like to help St. Andrew Ukrainian Orthodox Church in its work?  We currently are asking for donations for the following:

1.  Building Fund - Aid in construction of St. Andrew Ukrainian Cultural Center,  which includes a renovated banquet facility, remodeled and expanded commercial kitchen, loading dock for caterers, expanded office space and classrooms for our youth.  This year we are also building a 60 x 40 Storage/Garage Facility.  This fund also helps maintain all buildings on our grounds.

2.  General Church Fund - For regular upkeep and maintenance of our beautiful church and grounds.

3.  Vicariate of The Orthodox Church of Ukraine in The USA and Canada - To support the growth and administrative costs of our Ukrainian Patriarchate.

5.  Ukrainian Charities - To help in our charity work in Baturyn, Ukraine, The Buy-a-bed program for orphans in Ukraine, support of other Ukrainian Orthodox charities. The Best Homemade Cooking in Chicagoland
St. Andrew Kitchen has become famous throughout the Chicagoland area for its homemade Varenyky (pierogis), Holubtsi (Cabbage Rolls), Kolachky- Pastries and other Ukrainian specialties.

On any given Saturday a line of customers forms to purchase these delicious foods made by the devoted members of the St. Sophia Sisterhood and St. Andrew Brotherhood.  Sometimes the food never makes it to the car as our customers can't wait to begin eating!